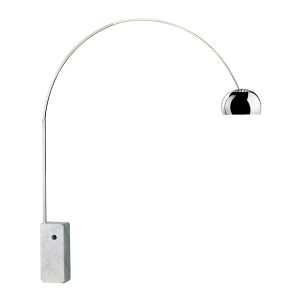 The lamp base is made of white marble from a box of about 65 kg, the corners are rounded, provided with a hole in the center of gravity, it is useful to fix the vertical rod that supports the arch itself, the movement is smooth the lamp (for example by including a simple broom handle). The stem is composed of three arcuate sectors profiled stainless steel U-section able to allow flowing into each other, and the telescopic advancement of the wires hidden passage. This gives the bow more 'amplitudes, with the positioning of the reflector at three different heights. The dome consists of two parts: a disk-shaped shell perforated to facilitate the cooling of the lamp (100 watt light bulb opal glass), the other an aluminum cabinet, supported the first, so you can be rectified position, depending on the height of the arc of the third sector. The maximum distance in horizontal projection, the reflector is 2 m from the base, the ride height is 2.5 m. The Arch has undergone many years of production Flos the only change of the electrical system, to bring the device to current standards. Sold thousands of copies, equally divided between Italy and abroad, has badly suffered from the phenomenon of plagiarism, of which the company was able to take legal action only in cases of slavish copying and misuse of the name. In 2007, the Court has recognized the protection of copyright, as do the works of art, a design object.

The size of the creative thinking of designers worldwide influence is often hidden in simple things, essential forms and ideas.

And 'so' think that in a lamp that would not look like all the others on the market we can 'to inspire, in the name as in form, from a simple "Arc".

We doubt that there are no lights of any kind that are tied to an era, a period style to more 'of this creation of brothers Achille and Pier Giacomo Castiglioni. Yet, despite its apparent typicality ', and this lamp' a product 'evergreen' and that 're-invented and adapted over time to all the trends of the main character have always seen since 1962, the first year of its creation .

The brilliant idea was' senz'alto to have achieved a floor lamp in all respects it behaves like a pendant lamp, but which by its nature lends itself to lighting and comfortable discrete areas of light that can be in places far away from traditional lighting points.

'S "ARC" (this is' just the name of the lamp produced by Flos) consists of a chromed metal reflector, an arc of adjustable length and a beautiful marble base of Carrara (Curiously,' the presence of a hole in the marble base that allows two people, easy transport into the hole by inserting a broomstick, so lifting 'of the lamp in danger of dropping it or getting back injuries).

All in all it is an essential recipe: technology, tradition, inspiration, research innovation, lateral thinking, simplicity 'and common sense! These are the principles that underlie the expression can be considered rational by the Castiglioni brothers and have always inspired their work.

Unfortunately, the last of them, Achilles, has left us forever, leaving a huge void in the world of Italian Design. If the body of the men died, but their ideas' are! The immortality 'of the creations of these giants and' witnessed by the popularity unchanged 'sales of their works, the real jewels of design.